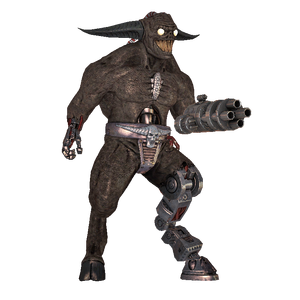 The Deus Ex is a creature of the Meta-streumonic force. It's one of the last enemies encountered in the game and is first encountered during the Noctis Labyrinthus mission.

The Deus Ex stands roughly 4 stories tall, if not more. It has brown skin, a demon head, a cybernetic left leg, a cybernetic right hand, an arm-mounted rocket launcher in place of its left arm and some other cybernetic implants.

It is highly durable except for its head, where it can be killed relatively easily with five shots to the head from the TRK A.D, three or four from the 444 Bear killer or a number of shots from the B.O.S.C.O. An effective, yet dangerous, way to kill a Deus Ex is to use a sword to backstab it, which, like it does with every other enemy, will kill it instantly. Despite its large size and strength, it can be easily killed using the Dragon's Breath PSI ability, often allowing for travel across the map over long distances with an easy target to spot.

Behind the scenes[edit | edit source]

Retrieved from "https://eyedivinecybermancy.fandom.com/wiki/Deus_Ex?oldid=7991"
Community content is available under CC-BY-SA unless otherwise noted.